Early summer 2005 the Czech model company Hacker Model proposed me to test their new EPP funflyers.
I already own the TL 96 Star from Hacker Model. It’s a beautiful scale model of a Czech ultra light plane.
I had never flown an EPP plane before, why not give it a try?

What’s in the box 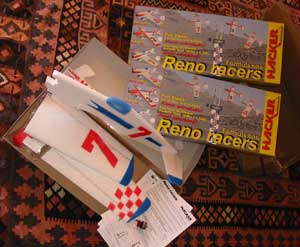 Few weeks later I received a parcel from Czechia.
Inside I found three little racers made of EPP.
They sent me all of the three Reno racers models available:

The Cosmic Wind and the Midget Mustang are very similar. El Bandito has a mid-wing and looks a bit different.
Wingspan is 79 cm (31 in) and the flying weight should be around 220g (7.7 oz).
The recommended motor is the brushless Mega Force 330 also available from Hacker Model.

The game sounds simple and exciting: Organize pylon races with your friends and fly full speed!
The assembly instructions that come with the kits have a section describing the rules of pylon racing.
Don’t look for a scale model inside the box, because you would be disappointed. What you get is an EPP funflyer. The fuselage is a simple profile and the whole model is made of tough crash resistant EPP foam.

The three models are cnc cut and come already painted. There are only very few parts to put together before you can rush to the flying field:
– The fuselage
– 2 half wings
– Horizontal stabilizer and rudder
– Complete landing gear with fairings and wheel covers
– The box also contains the hardware needed to install the radio (pushrods and control horns)

Assembly shouldn’t take more than a couple of hours.

Hacker Model also kindly provided a motor for testing the planes.
The MEGA FORCE 330 is a rotating case brushless motor.
The motor looks well built with quality material. The mounting plate is made of anodized aluminium. You can install the motor on the plane with 3 screws.
This little motor weighs only 38g ( 1.34oz).
It’s been designed to run with 2S Lipo packs.
These 3 racers are designed to use this motor. But you will be able to fit an equivalent brushless motor without difficulty. 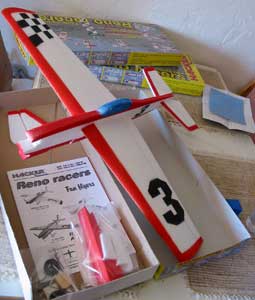 Et voila, it’s done!
Okay, let’s get serious now! We’re gonna need some CA glue and a sharp knife to complete the work.
You shouldn’t need more tools than that to build these planes.
I agree that EPP foam does not look to scale. But in addition to being crash proof, it has another advantage. You can glue it with standard CA glue without melting the whole thing!

Now I have a problem: which plane should I build first?
After a family vote we decide to go for El Bandito.

Anyway the 3 planes are very similar and assembly is exactly the same for the Midgtet Mustang and the Cosmic Wing. Because El Bandito has a mid-wing there are slight differences. The booklet coming with the kit explains the differences when needed.

The assembly instructions are in Czech and English. It’s quite clear and it details all the important steps with photos.
Although some points are not completely described or missing, anybody should be able to assemble these kits without difficulty.

For once I decided to read and follow the building instructions.
Let’s start with the wing assembly.
First you have to join the 2 half wings. The bottom of the wing must rest on a flat surface. The manual recommends to join the 2 halves with CA glue. But I preferred to use a thin film of epoxy. The extra weight is like nothing and the assembly is much stronger.
Good. The wing is mounted. Total time so far, about 5 minutes! But the wing looks so flexible! Well EPP is not an example of rigidity . And we still miss something to finish the work on the wing. 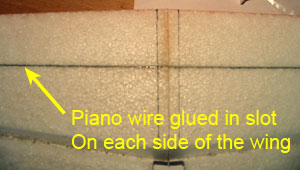 To give enough strenght to the wing, we have to cut a narrow slot on each side of the wing and place a piano wire inside. Once you have glued the piano wires with CA on the wing, no more problem of flexion!
In order to save weight you could replace the 2 piano wires by two 15/10 diameter carbon rods. But I did not make this modification.

The ailerons servo is installed at the center of the wing to move the fullspan ailerons using 2 pushrods. It’s simple and reliable.
Because of its mid-wing, installing the ailerons servo on El Bandito is not as easy as with the two other racers.
Once the wing is assembled and glued to the fuselage, you have to force the servo in place. Make sure the servo arm is in neutral position before you install the servo on El Bandito, because you wont be able to modify this later without removing the servo from the fuselage.

There is nothing about installing the stabilizer and the rudder in the assembly instructions, but I guess everybody should be able to find where those parts fit on the plane! Just make sure the stabilizer is centered and perpendicular to the fuselage before glueing it with CA.

Note about the elevator 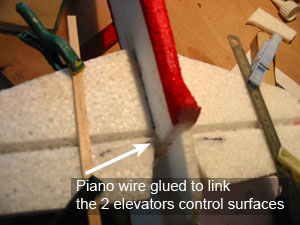 On the instructions booklet nothing explains how to link the two elevator control surfaces.
A complete beginner might find this troublesome, but there is nothing difficult here.
If you look inside the plastic bag containing all the hardware, you will find a piece of piano wire slightly bent.
As for the wings, you have to cut a slot on each control surface of the elevator and glue the piano wire inside with CA glue. The two control surfaces are now linked.
By the way, don’t do like me (see photo). It’s better to do it on a flat surface BEFORE glueing the stabilizer on the plane! 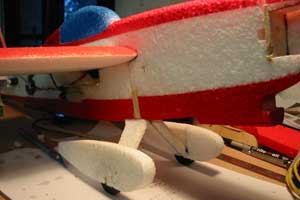 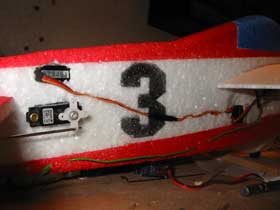 As for the aileron servos, you should install micro servos (5g category).
I’ve equiped the model with 3 Graupner C261 taken from another plane. Those servos are reliable and they never caused me any problem.
The two servos fit on the tail of the plane. On the assembly instructions a detailed photo indicates the distance from the stabilizer leading edge (15mm) to fit the servos.
Without thinking too much I trustingly followed the instructions…
Bad luck! Why did Graupner make the servo cables so short? The only solution was to use two extension cords to reach the receiver.
Before you install the elevator and rudder servos, I recommend you check the length of the cables and find a position where you won’t need any extension cable. 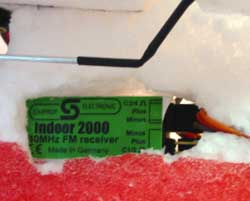 The receiver is a Simprop 2000. It’s very light and its range is excellent for an indoor receiver.
Now I have to find a position where all the equipment can be connected without using any other extension cables.
Once you find a proper location, cut a hole in the fuselage with a sharp knife to fit the receiver.
I feel like a butcher ripping this poor model on all the sides to fit the equipment.
Hey it’s an EPP funflyer, no mercy! 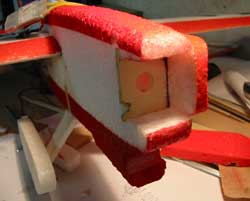 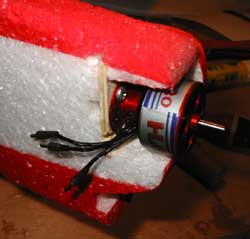 The assembly instructions are rather concise about motor installation.
As for the rest of the assembly, this step is very simple.
The only part remaining in the accessory bag is a square piece of plywood. This must be the motor mount!

Once glued on the nose of the plane, the motor can be fixed on the mounting wall and connected to the speed controller.
El Bandito is now ready for her maiden flight.

Total time before flying: about two hours of work. Not too bad!
I haven’t installed the battery pack yet, because I’m still waiting to receive the ones I’ve ordered!
You’ll have to find a location for the batteries that balances the plane properly. 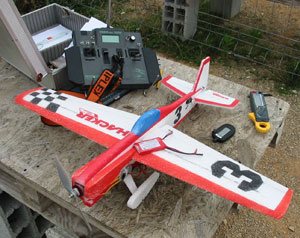 I finally received the battery packs. Time for the maiden flight!

Total weight: 280g. Slightly heavier than the 225g announced by Hacker Model. This is probably due to the equipment I used. 9g servos and a 25 amps speed controller caused extra weight for the plane. 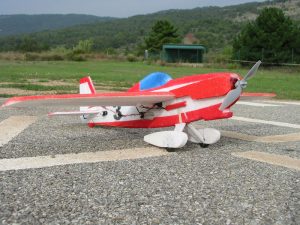 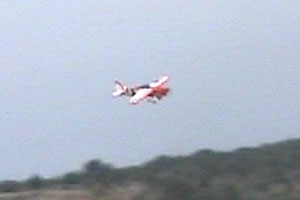 Okay, on the ground the plane looks a bit rough!
But what a plane in the air! She flies with authority and it feels like you are flying a bigger model.
Trajectories are sharp and precise. Despite the autumn wind I had for the first flight, the plane was still easy to control.
For the test flight I decided to reduce the control movements to 50%. However, I could still switch to full rate in flight if it wasn’t enough.
El Bandito needs only a few meters on the asphalt runway to take off .
The motor delivers a lot of torque, and as I did not give any right rudder for take off, the plane made a left turn immediatly after taking off. I’ve got the lesson for future take off. 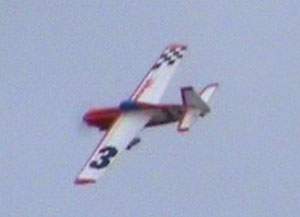 Flying El Bandito is reallly pleasant. At full throttle, the plane flies relatively fast, but it’s not a missile. You can fly level at half throttle. At this speed you feel like flying a little trainer.
But it’s more fun to fly full power. You have a racer, not a Cessna!

After 10 minutes of quiet flight to get used to the plane, it’s time to land. There is still more power than needed to have fun. If you manage the power properly, you can probably make 15 minutes flights with this model.

El Bandito flies remarkably well at low speed. the landing speed is ridiculously low and still, the plane does not stall. Anyway, a model like this one has almost no inertia. Giving some power should save the plane from a bad situation. And with EPP foam, you’re not afraid to hurt the model. 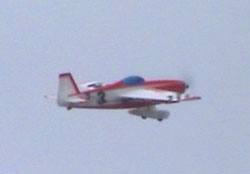 The landing is very smooth, the plane stops after a few meters.
For the second take-off I gave some right rudder and the plane perfectly stayed on the axis. That looked much better.
Now, let’s have fun. I switch the controls to full rate. The plane becomes much more reactive and fun to fly.
The plane shows an excellent ability to fly areobatics. You can also enjoy full speed fly-by’s at low altitude just before your eyes. This plane is definitely a racer. Pylon races and limbos are for her!
With the power available, you should also be able to torque roll with the model (I’m not good enough for that).

Well, that was not really planned. But considering how I flew the plane this was meant to happen!
One roll, then another one a bit lower, and then the last one really too low!
The plane crashed on the flying field. A bit worried I go to collect what remains from the model.
In fact the plane is hardly hurt. One wheel cover is broken and the motor mount has left the plane with the motor still attached to it.
The battery pack protected by the EPP foam is intact.
A few drops of cyano to glue the motor mount back to the fuselage and fix the wheel cover and El Bandito is back to flying condition.
EPP fun flyers are really fun!

I have been building and designing all sort of things since I was a kid, whether planes, boats or other kinds of projects.
I still have a deep interest for aviation and model airplanes and would like to share some of my projects through these pages.